It is with great sadness that we confirm the passing of Fire Chief Tim Tittle on Monday, Jan. 20, after a long and courageous fight against cancer. Chief Tittle served the Lewisville Fire Department for more than 40 years and leaves a legacy of unparalleled dedication and integrity. Lewisville has lost a good friend, and the community is a little bit lesser for his absence. Our thoughts are with the Tittle family as they grieve and with the fire services family as they strive daily to carry on the unequaled example of his life. 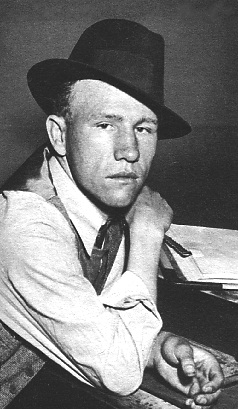 The year was 1934, and like the rest of the country, Lewisville was feeling the effects of the Great Depression. Lewisville was a small, quiet town then – and in a small, quiet town, the days can sometimes run together. But the afternoon of April 25, 1934, was a day that local residents would remember and talk about for years. That was the day Raymond Hamilton came to town.

Raymond Elzie Hamilton was born May 21, 1913, in a tent on the banks of the Deep Fork River in Oklahoma. One of six children, Raymond grew up in Dallas, where as a teenager he met Clyde Barrow and later joined the infamous Barrow Gang. It was probably no surprise to many people when he wound up an inmate at the Texas state penitentiary in Huntsville soon after his 20th birthday. But his friend, Clyde Barrow, didn’t forget about Raymond.

In the early morning hours of January 16, 1934, with a dense fog rising from the Trinity River, Clyde and an accomplice hid in a patch of weeds waiting for a line of prisoners to assemble for their daily work detail. At 7 o’clock, the inmates and their guards arrived. Clyde and his fellow gangster stepped out with Browning automatic rifles, while Raymond Hamilton and fellow prisoner Joe Palmer pulled out loaded .45 automatics that had been hidden for them in a woodpile. A brief gun battle ensued, during which Hamilton and Palmer escaped while one prison guard was killed.

By April of 1934, though, Hamilton had left the Barrow Gang and even found himself hunted by his former fellow gang members. He spent two weeks living in a train boxcar, where he met a hobo from Wichita Falls named Teddy Brooks. He convinced Brooks to help him in a bank robbery plan. The two men stole a blue Chevy sedan in Henrietta, and drove to Lewisville.

This was the site of First National Bank of Lewisville, founded by the Milliken family. Main Street was not so busy back in 1934 and did not have angled parking, so Hamilton and Brooks would have been able to park their car right at the curb, just outside the bank door (near the current Subway store on Main Street).

At 2:45 p.m. on April 25, Raymond Hamilton entered First National Bank. Standing only 5-foot-3, the 21-year-old probably did not look very imposing to bank clerk E.R. Walter. But that changed when Hamilton stuck a loaded .45 through the teller’s cage. Sitting nearby, bank manager and future Lewisville mayor M.H. “Horace” Milliken spun in his swivel chair to see the robbery taking place. Hamilton came around the counter and ordered both men to the ground, then took all the money he could find in the cash drawers. He asked about money in the vault, and when Milliken told him the vault was on a time lock, Hamilton reportedly said, “That’s the trouble with Texas, all the banks are on time locks.”

Hamilton ran from the bank and he and Brooks sped out of town in their stolen Chevy, heading east through Gunter then north on Highway 75 toward McKinney. Police set up a roadblock north of Howe to wait for the robbers. Grayson County Deputy Sheriff Roy McDaniel decided to patrol the highway between Howe and Van Alstyne, soon driving right past Hamilton going the opposite direction, He turned and chased the men until they saw the roadblock and made a u-turn. That’s when McDaniel forced them off the road.

Hamilton and Brooks stepped out of the car and when he saw a rifle pointed at him, he raised his hands and said, “I suppose you know who you’ve got.” He was right.

Raymond Hamilton pled guilty to the Lewisville bank robbery and was sentenced to 99 years in prison, bringing his total sentence to 362 years. He was returned to Huntsville, but only served less than one of those 362 years before being executed in the electric chair on May 10, 1935, for the prison guard’s death during his previous escape. Hamilton’s final words as he was strapped into the chair, 11 days before his 22nd birthday – “Well, goodbye all.”

Ray Hamilton and Terry Brooks drive up to the front of First National Bank in a stolen blue Chevy. Hamilton enters the bank wearing a wrinkled shirt. Working inside the bank are assistant cashier E.R. Wolters and bank president M.H. “Horace” Milliken, who would be elected mayor in 1941.

According to witnesses, here is what transpired:

Wolters: “Something for you?”

Hamilton, putting .45 caliber pistol through cage: “Shut up and get back there.”

Hamilton walks behind counter: “Now, both of you get on the floor.”

Hamilton rifles through cash drawers: “Any more money in the vault?”

Hamilton: “That’s the trouble with Texas, all the banks are on time locks.”

Hamilton: "Don't try to start anything when we leave. We don't want to have to kill anybody, and won't if you do like we say."

Hamilton runs from building, leaves with Brooks in stolen Chevy. After a lengthy chase, they are stopped near Van Alstyne.