The city logo features the purple outline of a bird inspired by the Purple Martin, a protected migratory songbird.

Purple Martins are one of America's favorite birds and are the largest North American swallow. They are one of the earliest neotropical migratory birds to return to the United States each year. It is estimated that more than 50,000 birds return each year to Lewisville, arriving in late February or early March and staying for six months to build nests, raise their young and prepare for their non-stop flight across the Gulf of Mexico to their winter home in Brazil.

Purple Martins are aerial insectivores that do most of their feeding at 100– 200 feet above the ground. Their diet is almost 100 percent flying insects, and they opportunistically feed on flying ants, beetles, butterflies, cicadas, damselflies, dragonflies, (drone) bees, flies, grasshoppers, hoverflies, katydids, mayflies, midges, mosquitoes, moths, stinkbugs and wasps. The birds make their temporary homes across Lewisville and surrounding areas, favoring manmade homes in populated areas, especially those near a stable water source such as Lewisville Lake. Many area residents erect martin houses to attract these graceful visitors. The city also has martin houses in several local parks,

At the height of summer in July, Texas martins gather in huge pre-migratory roosts at night in preparation for fall migration. Some contain tens of thousands of birds and Lewisville was once home to the largest Purple Martin roost in North Texas and one of the largest in the state. This roost split a few years ago with some moving from central Lewisville to the Lewisville Lake Environmental Learning Area (LLELA) and the rest moving to the Garland area. 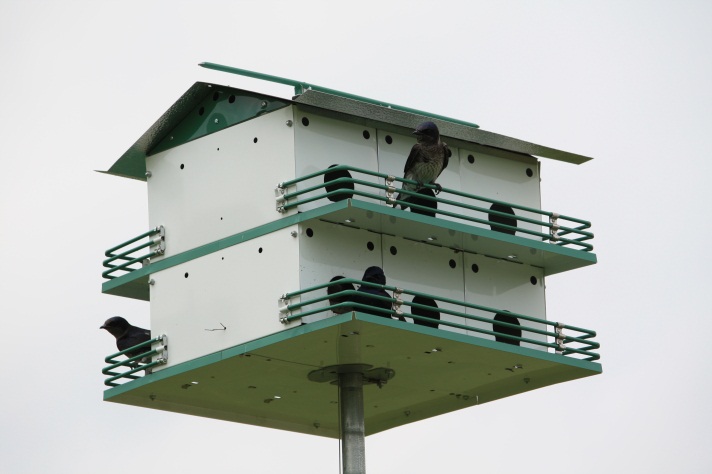 Purple Martin Landlords of North Texas is a regional association of bird-lovers who care for Purple Martins at their own homes and regularly visit Lewisville to view the local roost. Landlords member Kenny Crawford worked with City Cable LVTV to create a brief video showing how to build a martin house and attract Purple Martins. [WATCH VIDEO HERE]

Free viewers are required for some of the attached documents.
They can be downloaded by clicking on the icons below.