Lewisville Animal Services wants to help all lost pets find their way back home. Here's how to help. 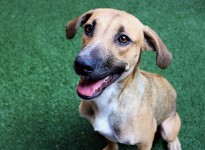 Animals that have been reported lost by their owners are listed in the lost animal sections depending on their species by using the green buttons above. Stray animals that are currently at the shelter or animals that have been reported found are listed under the found animal section depending on their species. For each animal record it will say "Animal in Custody" meaning the animal is at the shelter, otherwise it will say the animal was found in a city meaning that the finder is holding onto it and therefore is not at the shelter.