This bureau is under the command of Assistant Chief Todd Taylor. Chief Taylor is a graduate of the University of North Texas with a Bachelor of Arts degree in Sociology. He began employment with the Lewisville Police Department on February 17, 1993. During his tenure, Chief Taylor has worked as a Patrol Officer, Criminal Investigator, Neighborhood Resource Officer, Patrol Sergeant, Neighborhood Resource Officer Sergeant, Patrol Lieutenant, Criminal Investigations Captain and Patrol Captain. He served on the SWAT Team from 1996 to 2004. Chief Taylor also graduated from the FBI National Academy.

The Patrol Division responds to calls for service and provides a wide variety of police services. Led by four Captains, the Patrol Division provides 24-hour service, 365 days a year through four patrol shifts. In order to provide a balanced and timely response to calls for service, as well as preventative patrol, the city is divided into four geographic patrol districts. Each district is made up of several beats and staffed according to current crime trends and calls for police service.

The city is divided into four geographical areas or districts (District 1, 2, 3, and 4). Within each district there are four beats (Ex. 101,102,103, & 104). Police commanders may elect to assign a police officer to each individual beat within a district or any combination of one officer per two beats, three beats and so on depending on the particular shift, day or week, or special considerations within that beat. Within the beats are smaller reporting grids or IRAs (individual reporting area). The grids have remained stable for the past several years to allow for comparison of data, past to present.

The map below demonstrates this concept. To find which beat your residence or business is in, simply locate that on the map and find the corresponding beat number, or visit our interactive map. 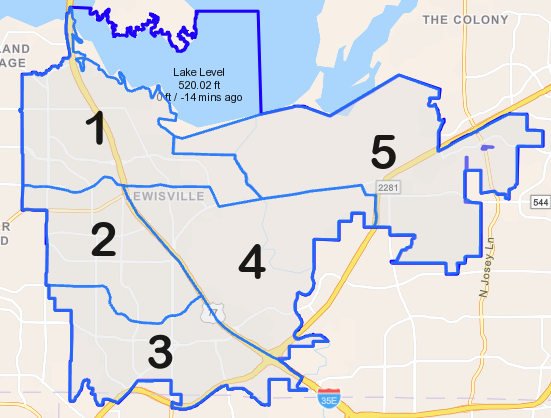