Intersection improvements at Charles Street intersections at Main Street and at Church Street include:

Curb extensions (also known as neckdowns) are included on all four corners of the two intersections. The curb extensions visually and physically narrow the roadway. This creates shorter and safer crossings for pedestrians while increasing available corner space for landscaping. One of the other advantages of curb extensions is that it provides a traffic calming effect for vehicular traffic, naturally slowing down the vehicle speeds, which is preferred in downtown areas with foot traffic. An example of curb extension is included in the picture below. 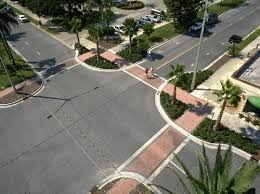 Tabs below show detailed Engineering maps for each corner. View larger maps by opening the map in a new browser window.